How Does Commercial Development Impact Your Property Value? 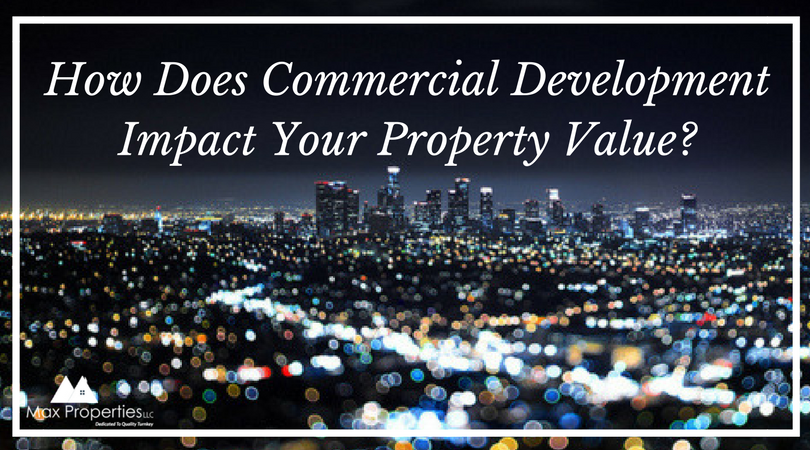 While a homeowner’s own actions can do wonders for their home’s value, often times what is happening around the property is really what could have just as much of an impact, if not more, on the value of the property. Think about it…

Perhaps a street not too far away is being widened so the surrounding city blocks can be zoned for commercial development. Maybe those old, brick cornerstone buildings down at the stoplight are finally having the boards ripped off and being revamped. This way the ground floors can be used for things such as boutique stores and coffee shops while the upper levels may be turned into chic condos or trendy rental units, if not office space and God forbid that big open field on the nearest major street suddenly has construction crews and equipment. A new Costco or Meijer could be on the way, which brings its own sets of pros and cons. Whatever commercial development might be on the way to some open space near your property, all commercial development doesn’t have a negative impact on your property value, per se.

Any conscious, concerned homeowner is definitely going to want to know the impact of new or existing commercial property nearby on their property values. And much of the impact depends on the proximity to your property, according to a Homebase/The Center for Common Concerns report. Those larger commercial developments and projects as well as fog-spuming industrial complexes tend to have a much greater impact – a negative one – on your home values. Let’s face it…people don’t want to live near factories or warehouses. However, the story changes up when the development or project offers upscale amenities or businesses and services that are actually desirable to surrounding residents.

A couple of prime examples of commercial property that impacts property values of a neighborhood positively would be lively nightlife venues, art galleries, or coffee shops. Reports have shown that a smaller, neighborhood movie theater, just as an example, can increase a home’s property value by as much as 14 to 30 percent. Smaller movie theaters are very much welcomed in residential areas, especially if they are in an inner-city, trending neighborhood. Much the same impact can be seen with grocery stores, especially in cities known to be food deserts – where small percentages of the population live within walking distance of a grocery store.

Public transportation, which is a form of commercial development (believe it or not), typically will also have a considerable impact on your home’s property value. Think about it: in cities with high population density (and therefore high congestion), public transportation is the very reason certain neighborhoods’ rents and home values are nearly twice those of areas far away from a transit network. Cities like New York, Chicago, and San Francisco are prime examples where apartments close to transit lines go for top dollar. . These are cities where people may prefer to live close(er) to downtown, or other major office areas, to be close(er) to work, therefore a mass transit system nearby is a must before even considering looking at an apartment, much less renting it. A 2011 Center for Housing Policy report found that homes within a five-to-ten-minute walk from a transit line or network can see a 20 to 25 percent increase in value… And this is even if the neighborhood is considered to be undesirable overall.

Should construction cranes start looming in the skies nearby, clam down… don’t fret just yet. The first and most important thing to do, before frying your brain over whether your property value will go down, is to find out exactly what is being built. Some commercial development can indeed have a negative impact on your property values, giving you all the more incentive to purchase a property in a more tightly-woven, dense neighborhood where perhaps the kinds of developments that hurt values might be less likely to pop up. When it’s all said and done, though, if theaters, coffee shops, bookstores, or grocery stores, just to name a few, are coming to your neighborhood, kiss the heavens above because your home values are probably about to increase.